SUMMARY OF RECENT UPDATES FROM THE APPLICANT

Updates were submitted by the applicant and published on the B&DBC planning portal:

29th October – Updates to the FULL Application (for Unit 1 only)

6th November – Update to the OUTLINE Application (for Units 1-4, the full site)

A comparison of the original submissions showed a discrepancy between the employment forecasts for the site. The most recent updates show:

Therefore, there is still a discrepancy between the 2 applications that is not explained.

Highways England asked the applicant to revise their Transport Assessment to assume the worse case scenario in terms of the traffic (by treating all the Units on the site as last mile parcel delivery operations). They also asked that the effect of the Critical Treatment Hospital was included in the model.

The applicant has revised their assessment but has not done all that HE required. However, they have provided a new traffic forecast which shows and increased transport impact:

The applicant suggests that the impact of the increased traffic on the road links is still acceptable.

There is an assumption regarding the southbound traffic from the site (cars) using the A30 / A33 to travel southbound rather than use the M3 via J7 and this is key as a significant increase in traffic joining the M3 southbound could cause the Weaving assessment for the link between J7 > J8 to highlight a problem. There is a spurious statement about using the A30 as a parallel link road to carry traffic between J7 and J8 to overcome the weaving issue but HE will certainly not think that this is a viable suggestion.

It will be for HE / HCC Highways to review the updated figures and decide accordingly.

Probably given the increased traffic forecast, the applicant is now proposing new sound barriers on the roadside outside the cottages at Ganderdown (on the A30) and in the garden of Keepers Cottage on Trenchards Lane.

See below extract from the applicants document and a photo montage of the view of Ganderdown: 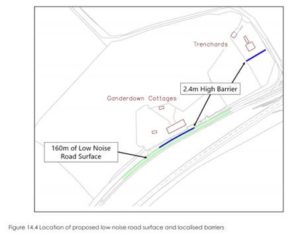 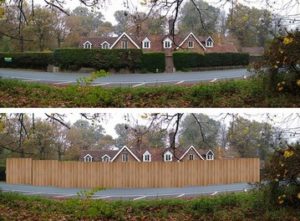 There are no changes to the Air Quality assessment (i.e. no impact)

The Bund (on the southside of the M3)

It is not clear why the change highlighted below has taken place, but it is perhaps as result of the recent ground survey tests that took place in the fields.

The purpose of the bund was originally suggested as being to shield the view of the development from Dummer and to provide a noise buffer (but we all know that the primary aim was for it to be a spoil heap!) . The latest changes seem to have significantly reduced the purported benefits so it does raise the question ‘is it of any benefit to the residents of Dummer?’