Mega lorries of the future?

Green light for longer and heavier lorries on roads

A new generation of “mega-lorries” could take to roads under government plans to cut overall vehicle emissions.

Ministers are preparing to outline proposals that would allow heavier and longer HGVs to operate, enabling them to carry more freight. The Department for Transport (DfT) plans are aimed at cutting down the number of journeys needed to transport goods.

The maximum weight of lorries on British roads would increase by four tonnes to 48 tonnes and trailer lengths would be extended by two metres. 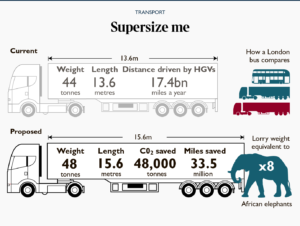 There are concerns that population growth and demand for online shopping is leading to a sharp increase in lorry traffic. Latest DfT figures show that HGVs covered 17.4 billion miles on Britain’s roads last year, a rise of almost 13 per cent compared with the mid-1990s.

Road safety groups have opposed bigger lorries, insisting that the extra length and “tail swing” when turning threatens pedestrians and cyclists. Many cyclists have been killed at junctions by left-turning lorries.

However, the government insists that previous trials show that the larger vehicles cut emissions and accidents by taking more lorries off the road.

The DfT said that the longer trailers would be able to carry two more rows of pallets or at least three rows of supermarket goods cages on each journey.

An official trial started in 2012 and was intended to last 15 years. However, the DfT is proposing to end it early and reform laws around HGVs to permit all operators to use the longer trailers.

A consultation on the measures will open today and run until the new year. Separately, the DfT will run a second consultation on plans for a trial involving heavier lorries. The change would allow the direct transportation of heavier containers from freight trains to lorries, making it easier to shift cargo between rail depots and road distribution centres.

Grant Shapps, the transport secretary, said that trials of longer trailers “clearly show the benefits for business and the environment”.

In Europe only the Netherlands and Norway allow lorries bigger than the proposed 48 tonnes, with 50-tonne limits. In the US, lorries are limited to 36 tonnes for interstate journeys, but individual states allow higher loads.