Reasons why the warehouse applications should be refused – 29th March 2021

Reasons for rejecting the proposed development

(numbers in brackets refer to sections in the Appendix)

1. The scale of the proposed development would dwarf anything comparable in the area;
despite this, it would generate relatively few jobs.
The warehouse would be four times the size of Sainsbury’s regional distribution depot but
would employ fewer people (ref 1.1). It would not be an efficient use of land in terms of
employment because of the high impact of automation on employment in the transport
and storage sector (ref 1.2)

2. The need for the proposed development is not proven, and its size is not supported in
the Local Plan.
There is no proven need for this speculative development. The proposed size of the units
exceeds the need, defined in the BDBC commissioned Economic Needs Assessment
(Feb’18), for 72000m2 of new warehouse space by a factor of 3 (ref 2.1).

3. The development would have a severe adverse impact on the natural environment
It would require the destruction of many trees, potentially under Tree Preservation
Orders, including an avenue of 70 mature oak and beech. From a bio-diversity perspective,
such trees are known to support up to 2,300 species of wildlife (ref 3.1)
In addition, the location of the site directly impacts the “strategic networks” identified in
BDBC’s Green Infrastructure Strategy (ref 3.2, 3.3)

4. The proposed warehouse complex would damage Basingstoke’s attractiveness to both
businesses and residents.
Basingstoke’s stated strategy is to attract high value industries in order to grow what is
already one of the highest areas of Gross Value Added (GVA) in the South East (ref 4.1).
Along with the Council’s active support for business, key attractions for them are the
natural environment of the Borough and the quality of life enjoyed by its residents. The
proposed development site, where the M3 at J7 and the A30 converge to form a major
gateway into Basingstoke is critical to the visual character and perception of the borough.

5. The proposal contravenes the Local Plan in a number of key areas.
The rural location is completely isolated from other commercial developments in and
around Basingstoke and the proposed development is incompatible with the
neighbourhood. The proposed noise barriers are an explicit recognition of this
incompatibility (ref 5.1)

6. The warehouse would not address current levels of unemployment in Basingstoke
The nature of the low-skilled work suggests that the operator would need to source many
employees from outside the Borough. The consensus is that the UK economy will return
to 2019 levels by the end of 2023 which is when the warehouses would become
operational (if approved). Given the proposed development’s rural location and poor
public transport links, this would encourage access by car. (ref 6.1)
28 March 2021 DC Briefing paper 2

7. The proposed buildings can only be described as ugly and unattractive.
The proposals contravene both the Adopted Local Plan (ALP) and National Planning Policy.
The ALP requires delivery of High Quality Development and mitigation of the visual impact
of a proposal outside Strategic Employment Areas. National policy requires planning
decisions “to be sympathetic to local character” (ref 7.2)
BDBC’s Landscape and Urban Design Officers have both objected to the proposals and
confirm that their objections have not been addressed (ref 7.1)

8. The size and scale of the proposed buildings are incompatible with BDBC Policy.
Design & Sustainability guidelines require buildings taller than 18m to be clustered around
the Town Centre and fit in with character of the town unless fully justified. The height of
Unit 1 alone would be 26m. The Urban Design Officer considers that the proposals breach
these BDBC guidelines (ref 8.1)

9. Significantly increased traffic volumes would bring local infrastructure near to full
capacity
1,500 HGVs and 3,000 other vehicle movements per day would mean that local roads in
the area including the M3 junction would be at or near capacity. Further developments
of the area could be uneconomic given that they would have to meet the costs of
upgrading infrastructure. This constraint could prejudice developments envisaged in the
recently Cabinet approved Vision Statement for the area – whether they are housing,
businesses or public services (Ref 9.1, 9.2).

10. Residents of Basingstoke are strongly opposed to the proposal
The applications have attracted more than 800 public comments of which over 98.3% are
objections to the development.
Analysis of the applicant’s own Statement of Community Involvement (SCI) shows that
74% of respondents on the proposed location opposed the development.
On this basis, the proposal is one of the most unpopular of recent years amongst
residents. (Ref 10.1).

1.2. Proposed development of 217,000m2 is over four times the size on a site over 1km long
employing fewer than 750 people. It is not an efficient use of space in terms of providing
additional employment.
Automation of transport and storage sector expected to impact 56% of jobs (BDBC
Horizon 2050 report).

2.1 The BDBC commissioned Economic Needs Assessment (Feb’18) provided an updated
requirement for 72,000 m2 over the 122,000 m2 defined in the Adopted Local Plan. Since
then, further developments have been approved e.g. St Modwens Park in Viables
(17,311m2) and the ex Motorola Site in Viables (19,820m2) and this is not accounted for in the recent (16 Mar 21) assessment report published by BDBC Policy Department.
The applicant is attempting to justify the development as a regional / sub regional
requirement so there should be a consideration of the availability of other such capacity
in the wider area. In Andover, for example, there are many sites being advertised for
warehousing use, some of which have been available for some time. These include
Logistics City (45,300m2) and Andover Business Park (29,285m2).
The ENA report also highlighted that 50% of the identified need could be met through
redevelopment in Daneshill / Houndmills. Industrial land has often been repurposed in
Basingstoke, for business, retail and housing use. All of this raises the questions of exactly
what capacity is required in the area and suggests that brownfield redevelopment should
be given priority over greenfield sites.

3.2 The avenue of trees leading to the existing buildings on the site from the A30 would be
removed under the proposal. 67 Oaks and 3 Beech of Grade A(ii) status would be
destroyed (these are “..trees, groups or woodlands of particular visual importance as
arboricultural and/or landscape features with a life expectancy of at least 40 years..”).
For more details on species associated with oak trees see here
https://www.actionoak.org/projects/purpose-uncovering-biodiversity-oak-trees.

3.3 Ecological networks or Green Infrastructure connect core biodiversity areas allowing
wildlife that local communities value and enjoy to move freely between them. In the
Basingstoke area, ancient woodlands and established tree structures provide part of such
corridors. Networks connecting the South Downs National Park and the North Hampshire
AONB run through the area close to J7 M3 partially shown in the map above.
National Planning Policy Framework (NPPF) requires local planning authorities to; “.Set
out a strategic approach in their Local Plans, planning positively for the creation,
protection, enhancement and management of networks of biodiversity and green
infrastructure, a network of multi-functional green space, urban and rural, which is capable of delivering a wide range of environmental and quality of life benefits for local
communities..”.

5.1 Specifically, Policy EP1 Para 7.15 identifies that “Storage and distribution facilities can be
difficult to reconcile with neighbouring uses, particularly residential development, owing
to issues such as hours of operations.”
The following picture gives an indication of the proposed noise barriers immediately in
front of Ganderdown Cottages. It does not show the crash barrier that HCC Highways are
required to install in order to protect road users.

6.1 Latest OBR figures suggest that claimant numbers (nationally) will fall rapidly from a lower
than forecast peak to only slightly above historically low levels by 2024.
Consensus is that the UK economy overall will return to Q4 19 levels by Q2 23. i.e. when
the warehouse jobs would become available (see Monetary Policy Report report of Feb
2021).

7.1 See consultee comments from BDBC’s Urban Design and Landscape teams.
Comments include:
“these large and plain buildings would positively detract from any ‘gateway experience’
at this … entrance to Basingstoke”
“the development proposed will inevitably result in significant and adverse changes to the
landscape”
“its height and scale would be dominant and incongruous within the existing countryside
context” and “at odds with the rural landscape surrounding it”

• Key Principles CSA1, CSA2, and CSA3 require solutions to be informed by the context
of the site and to respond positively to the spatial structure of the area;

• Key Principles HQB1 and HQB2 require the bulk, massing, and scale of buildings to be
well related to the context;

• Key Principles TB1 and TB4 require tall buildings (i.e. those over 18m in height and
therefore applicable to Units 1 and 2) to positively respond to the character of the
town and be “well designed with attractive proportions..”

This is an aerial view Manston Airfield prior to Brexit showing approximately 1,500 HGVs.
This is the expected number of additional HGV movements expected per day as a result
of the proposed development. (source, The Times, Dec 23rd 2020)

9.2 This includes access for Manydown South and other potential developments mentioned
in the approved Vision statement for the area; see
https://www.basingstoke.gov.uk/rte.aspx?id=298&task=View&itemid=9908. 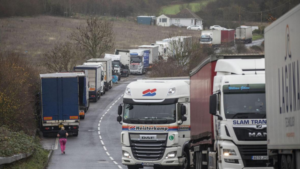 Lorries queueing in Hoo, a Kent village next to “a huge Amazon..warehouse..” “..Residents
complain that up to 50 lorries park overnight on country lanes while drivers sleep..”
(source, The Times, Dec 6th 2020) 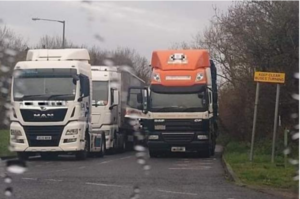 Lorries parking anti-socially in Tursdale in Co Durham, another small village, waiting for a slot at a new Amazon warehouse. A local resident comments: “There’s no lorry park so they come here and park up instead. It’s just so disrespectful to take over a massive site ….They knew there isn’t the capacity in the area to handle that many HGV’s coming through.”
(source, The Northern Echo Dec 23rd 2020)

10.1 Statement of Community Involvement (SCI)
Opinions expressed on the proposed land use and location (Appendix VII of applicant’s SCI)

It is also an indication of public interest in the proposed development that social media
content (Facebook, local newsletters etc.) has attracted in excess of an estimated 100,000
visits by Basingstoke residents.